Bodh Gaya: Tibetan spiritual leader His Holiness the Dalai Lama conferred the Avalokiteshvara Empowerment on Friday in Bodh Gaya. At the ceremony, His Holiness highlighted the special karmic link between Tibetans and Chenrezig.

An estimated 35,000 devotees, Tibetan monks, nuns and laypeople, people from the Himalayan regions and 2500 from 67 other countries had converged at the holy Buddhist seat to receive the teachings of His Holiness the Dalai Lama.

A dozen Vietnamese monks and nuns chanted the ‘Heart Sutra’ earnestly in their native tongue. They were followed by ten monks from the Bangladesh Buddhist Monastery who recited the Mangala Sutta in Pali. A third group, who recited the ‘Heart Sutra’ once more, consisted of Korean nuns and monks. Members of a family sponsoring today’s events offered a mandala and threefold representations of the Buddha’s body, speech and mind.

“Today, since I’m going to give an Avalokiteshvara empowerment,” His Holiness advised, “while I complete the preparatory rituals, it would be good if all of you recited the six-syllable mantra, Om mani padme hung.”

When it began to rain, His Holiness called for a group of Geshés to come up and sit in the space in front of him and urged the audience to squeeze up to shelter as best they could.

“Today, in this extraordinary place where the Buddha became enlightened, we remember him, his seven successors, Nagarjuna and his disciples, as well as Asanga and his brother. We still have access to the legacy of Buddhist teachings through the writings of these great masters.

“Great advances have been made in terms of material development, which support our physical health and comfort, but don’t bring peace to our disturbed minds. Happiness is essentially found within. We may take pleasure in shows and other entertainment, but the moment the show’s over, the pleasures stops. This is true of our enjoyment of beautiful music too. Instead of relying on sensory experience, we’d be better to find out how to calm our unsettled states of mind.

“Different religious traditions have benefited millions of people down the centuries. Those that believe in God pray to him when they face difficulties. This gives them hope. In India there are also traditions like the non-theistic Samkhyas, Jains and Buddhists that aim for inner peace on the basis of understanding the workings of mind and emotions. 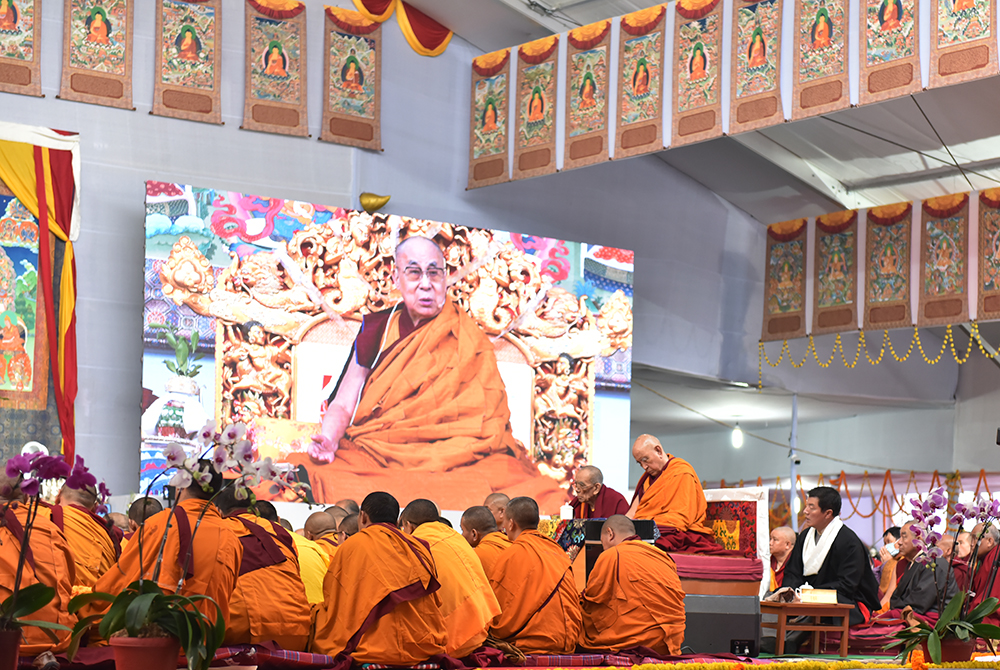 His Holiness announced that he was going to give the bodhisattva vows relying on the rite in the chapter on ethics from Asanga’s ‘Bodhisattva Grounds’ (Bodhisattvabhumi). He told the audience that this particular approach had declined and he had wished to restore it. It allows for taking the vow before an image of the Buddha. Consequently, he requested his Senior Tutor, Ling Rinpoché to do what was necessary. Rinpoché first took the vow in front of the image in the Mahabodhi Stupa and then gave it to His Holiness. Serkhong Rinpoché acted as the attendant for the ceremony and when it was done, both he and His Holiness wept for joy.

“Cultivating bodhichitta is my most important practice,” His Holiness declared. “Bodhisattvas observe sentient beings and focus on attaining enlightenment. The vow can be taken before an image of the Buddha, or from a teacher who possesses it. Bodhichitta is a universal cause of peace because peace in the world requires that we are at peace within.

“When their leaders create conflict in terms of ‘us’ and ‘them’, common people suffer due to their lack of protection. As human beings we all benefit from compassion.

“I am constantly aware of bodhichitta which brings about a peaceful state of mind. To be altruistic is to be helpful. If you have a warm heart, you’ll have more friends. Bullying and exploiting others turns people away. Taking and keeping the bodhisattva vow strengthens our determination to engage in the practices of a bodhisattva. Observing the ethics of this vow even for one day is immensely beneficial.

“I remember that I have the bodhisattva vow even in my dreams. There is no greater factor contributing to peace and happiness in the world.”

He reminded the audience that they had received the empowerment with yesterday’s reading of the ‘Thirty-seven Practices of Bodhisattvas’ as the preliminary teaching. He gave them the bodhisattva vow according to the ethics chapter of Asanga’s ‘Bodhisattva Grounds’. He advised people to follow this up by undertaking a retreat. He also encouraged them to read Shantideva’s ‘Guide to the Bodhisattva’s Way of Life’, especially the eighth chapter that reveals how to cultivate bodhichitta, and the sixth that gives a powerful account of how to counter anger and hatred.

Finally, he had words for the Great Prayer Festival Organizing Committee. “These days,” he told them, “when we watch the news, we see reports of poor people suffering in Bangladesh and Africa. It occurred to me that you might consider making a contribution to helping such people from the Prayer Festival funds. I’ve seen and heard people in Africa and Bangladesh grappling with the consequences of flood and fire pleading, “We’re human too.” It’s my observation that UNESCO has done consistently good and beneficial work on the ground in such situations and a donation to that organization would be good.”

Before returning to the Monastery for the day, His Holiness announced that from Saturday he will resume and hopes to complete the Manjushri Cycle of teachings that he began last year. He remarked that as someone who has relied on Manjushri’s mantra since he was a child, he is convinced of its effectiveness in improving intelligence. 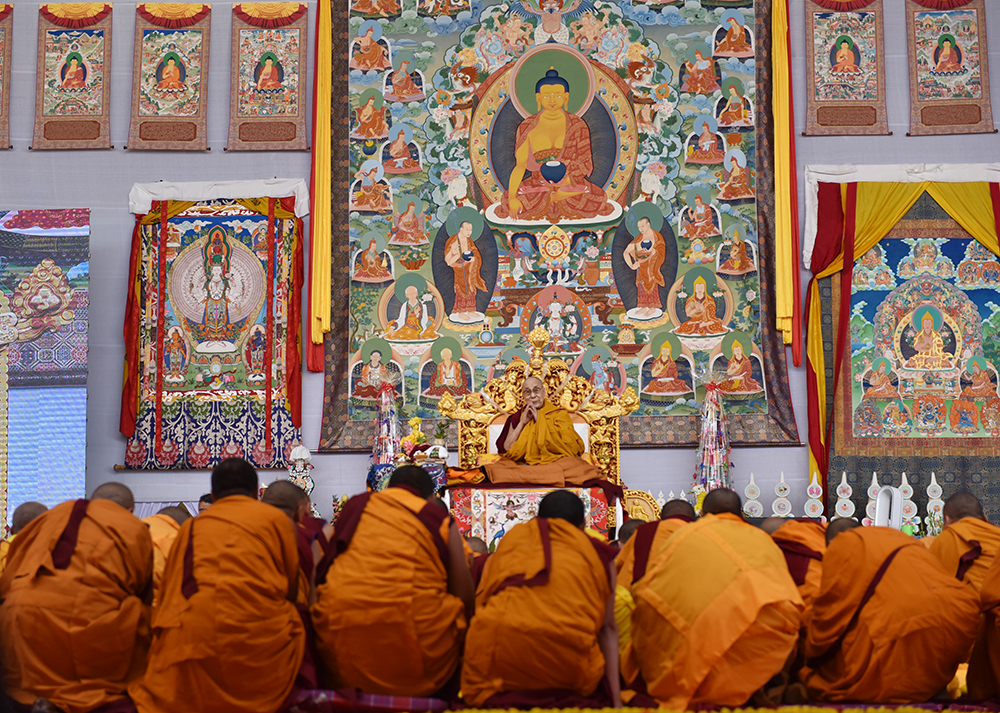 His Holiness the Dalai Lama giving the Avalokiteshvara Empowerment at the Kalachakra Ground in Bodhgaya, Bihar, India on January 3, 2020. 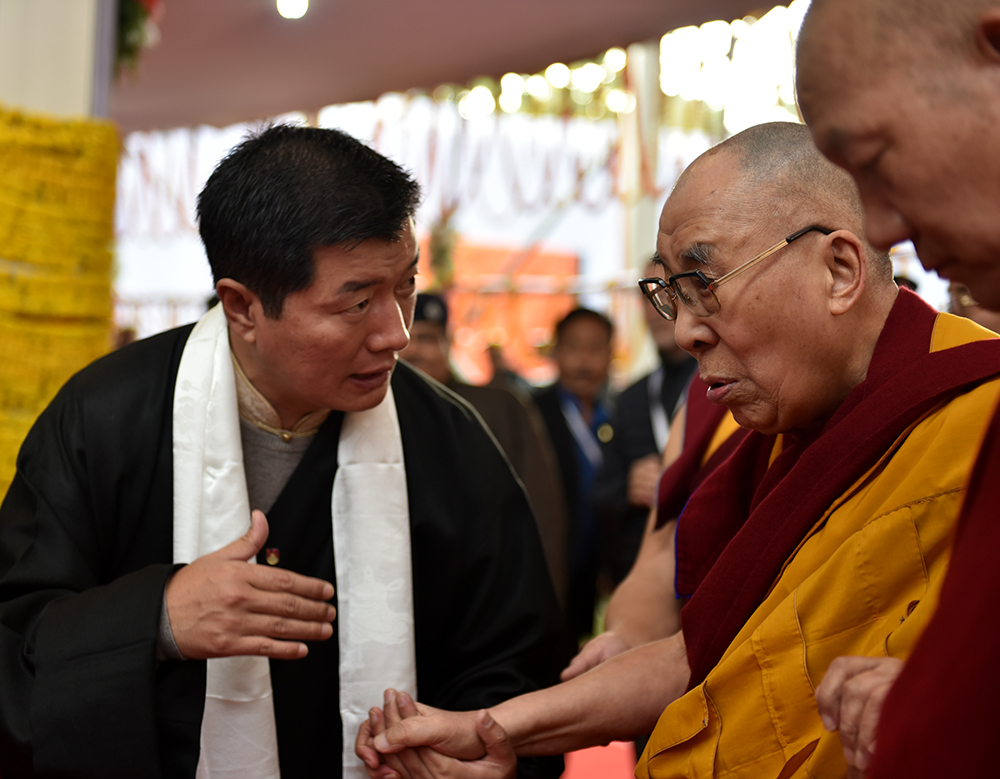 Sikyong Dr Lobsang Sangay greets His Holiness as he arrives for the teaching. 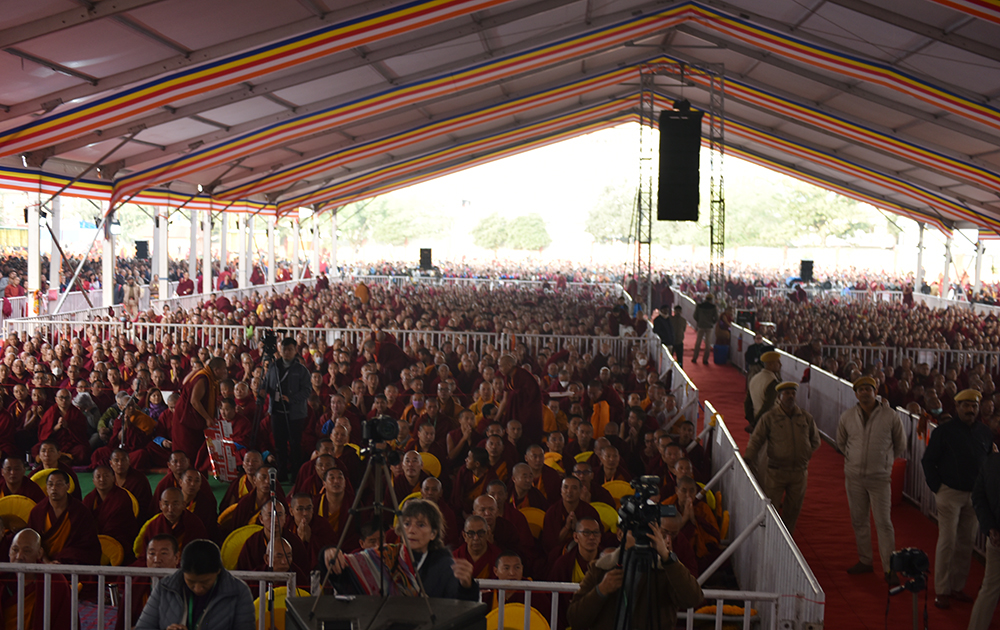