Kollegal: In the aftermath of the Wuhan originated COVID-19 pandemic, Kollegal Dhondenling settlement in accordance with the Kashag’s appeal, has been engaged with precautionary measures and relief efforts during this crisis.

The settlement emergency committee for COVID-19 has managed to raise funds amounting to 5.68 lakhs (5,68,525) from its residents, from which a partial donation of 1lakh was made to the CM relief fund.

An amount of 1.77lakhs (1,77,045) was spent to avail the settlement hospital a new oxygen concentrator in necessities. Apart from that, monasteries and schools within the settlement were provided with sodium hydrochloride for sanitization purposes. Similarly, 3 local Indian hospitals were provided with necessary supplies for free. Every household within the 22 villages was able to sanitize their immediate surroundings with the disinfection supply.

Of the funds raised, 2.9 lakhs (2,91,500) were used to donate food grains to the poor in nearby Indian communities. 767 ration kits each costing 380 were distributed amongst them.

As the amount of ration kits distributed did not prove sufficient, request for additional funding was sent. Subsequently, US-based Vietnamese-origin Ms Tenzin Dekyi la donated USD 10,000 which amounts to INR 7,65,7640 through Dzongkar Choede monastery. Accordingly, additional 1000 ration kits were distributed to the destitute who had been left out.

Under the initiative of the Health Department of CTA, funds worth of 31670 were released towards the production of face masks for Tibetan settlers. As per the Settlement Officer’s request for funding, Dzongkar Choede monastery based in Hunsur donated 30,000  and Kyabje Khen Rinpoche personally donated 10,000, adding to a combined total of funds worth of 71,670. About 10 tailors from the settlement volunteered to undertake the production of face masks.

Distribution of ration supplies to the elderly in the settlement. 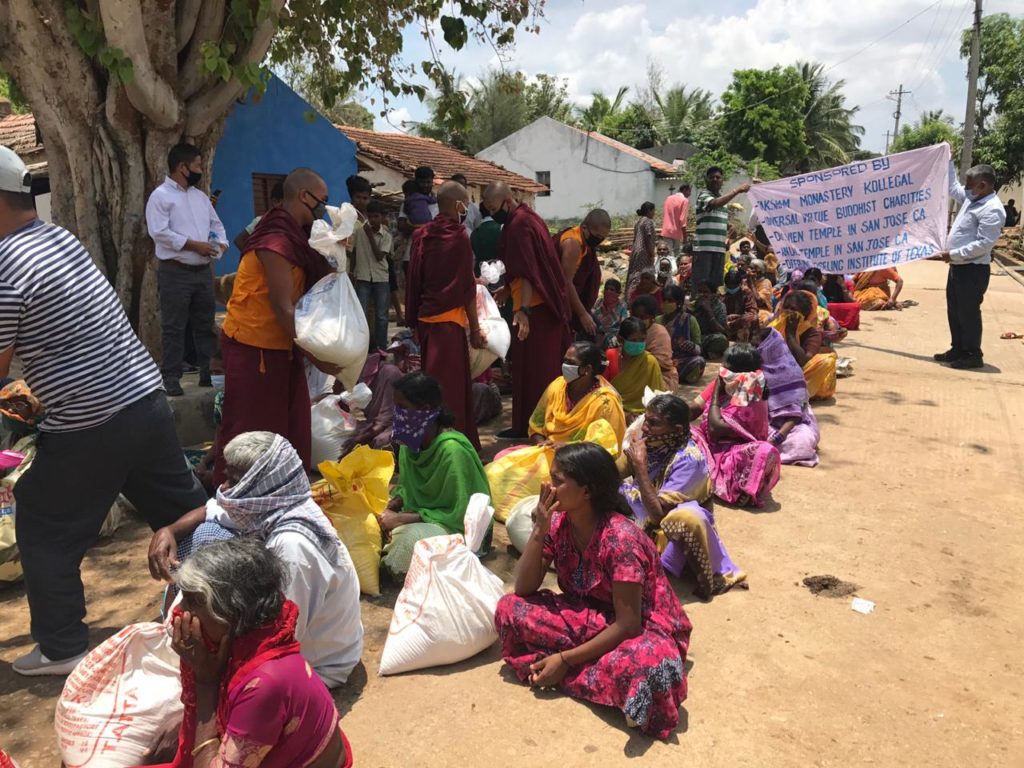 Production of essential face masks by Tailor volunteers for the residents.

Paonta Settlement Officer met with H.P Governor and other dignitaries